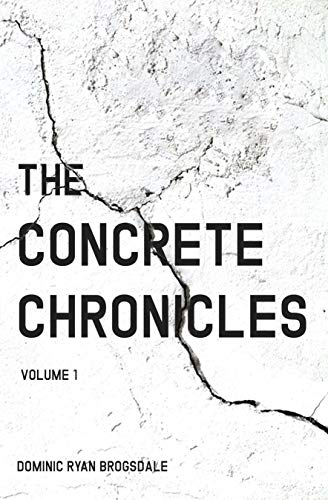 Listen to an excerpt of The Concrete Chronicles

Urban storyteller Dominic Brogsdale brings readers tales of raw, intense authenticity. The following stories arise from urban reality, from what he and the people he’s known have experienced. In this collection, you’ll meet:

Earl, who longs for prosperity. In “Evil on Top of Evil,” Earl decides to acquire his fortune the old-fashioned way: by taking someone else’s. Thus begins a downward spiral of murder and mayhem.

Major is also a product of the ’hood. He longs for prosperity, too. In “Ballin’,” Major tries to rush the process to financial stability and discovers that some things don’t have shortcuts. Meet him years later as an adult when he’s finally established himself as a successful businessman who attempts to help one of his old friends from the ’hood.

Geroy and his friends entertain themselves with sociopathic singlemindedness in “Murder for Fun.” Twisted gang loyalty entwines with their game to take them on a horrifying journey mixing murder and street drugs.

Bryan’s social environment taught him that might makes right until this bully’s father teaches him otherwise. In “The Bully Gets Disciplined,” he learns a timely lesson in compassion that might just save him from the lackluster fates of his urban classmates.

Evil on Top of Evil

Woe to those who plan iniquity,

to those who plot evil on their beds!

At morning’s light they carry it out

because it is in their power to do it.

They covet fields and seize them,

and houses, and take them.

They defraud people of their homes,

they rob them of their inheritance.

It was 2:00 am. Earl, Vance, Itrez, and Lonnie sat at a small poker table in the kitchen and smoked blunts and Newport cigarettes. Guns lay on the table. They drank Steel 211 Reserve and Hennessy. Only Earl stayed sober.

Ebb was short for Ebony. She was petite and light-skinned with hair down to her neck. Earl liked her personality, polite yet cunning.

Ebony walked in the kitchen and said, “What, bae?”

Keeping a straight face, Earl asked, “You order that food, pizza or whatever?”

Ebony answered, “I tried, but you know they stop delivering food out here. This is Jordan Downs projects; nobody’s coming out here at night, especially since two drivers got murdered last week, and they still don’t know who did it.”

Vance grimaced and said, “Oh, yeah, that’s right, but wouldn’t they be able to trace the call or the number of the people that got popped?”

“Everybody killin’ out here, B. You don’t know who be killin’ who!” Itrez commented.

Ebony shrugged and glanced toward the cabinets. “Well ... I can make you some ramen noodles, cut up some hot dogs, and put some ketchup in there.”

Earl tilted his head back and stated, “I’m tired of eating that ghetto-ass shit. Can a muthafucka have a hamburger or something?” He paused. “Whatever. Cook it up real fast. We got some Flavor Aid or something in this bitch?”

Ebony replied, “We got Flavor Aid, but no sugar.”

“All right then, make me some of that then. Fuck, it’s food.” He couldn’t expect Ebony to force Domino’s to deliver and she couldn’t magic food that wasn’t in the cupboards.

“Okay,” she replied and headed toward the cabinets and pulled down the ingredients necessary to whip up a quick meal.

Earl turned his attention to Vance, Itrez, and Lonnie. , “All right, muthafuckas, y’all ready to get this money, stick these rich muthafuckas up, and get up out of here?”

Vance, using his tongue to roll up some weed in a Swisher, said, “Hell, yeah!”

“All right, so you know Ebony be doing cleaning services out in them little rich areas, and she’s been peepin’ game for a while, so we can’t leave no paper trail!” Earl reached in his pocket and grabbed a white piece of paper with addresses on it. He slammed it on the table, unfolded it, and said, “All right, Vance, you go to 6123 address; Itrez, you go to the 6633 address; and, Lonnie, you go to the 6636 address. I’ll take the 6366 address.”

Lonnie inhaled the blunt, exhaled, and asked, “How we gonna get in without the alarms going off?”

Earl looked at Ebony and caught her eye. “Explain.”

As she cooked, Ebony stated, “They trust me and they up in age, so I disarmed them before I left today.”

Impressed, Vance said, “Damn, Ebb, how you put this together?”

Ebony replied, “I’ve been working out there for a year or so; and, while I was cleaning, I’d watch them put in the code.”

Earl nodded in agreement with his girlfriend’s cleverness, and said, “She left the downstairs windows unlocked, too! So, open it up, pop them old bastards, go through the drawers, get the jewelry, and be out!”

“So, do you work just those ones or different homes out in them rich areas?” Itrez asked.

Ebony shrugged and answered, “I work at a lot of different homes, but these homes, in particular, don’t have dogs, children, or cameras.”

Earl stated, “This should be pretty easy, in and out.”

Ebony agreed, “Yeah, they jewelry and money just be laying around.”

Lonnie looked at Ebony and said, “Are you sure you got all the facts straight, because I’m not tryna get caught!”

“Yeah, I’ve been watching over a year now. I’ve been all through they house and everything. I know which house is which.” She gave him a smile of reassurance.

Lonnie let out a big sigh of relief. “Okay.”

Earl looked at Lonnie. “Don’t get nervous now. If you nervous, you better bounce now!”

Lonnie shook his head. “Nah, you already know I got caught some years back for that stick-up on granny. It’s a wrap for me if I get caught again!”

Earl looked at him and replied, “You got this, my nigga!”

Ebony brought the ramen noodles and sliced hot dogs in a bowl for Earl and Lonnie.

As though appearing from nowhere, one of Ebony’s four kids ran into the kitchen. He saw the Glock 19 near the edge of the table and reached for it. Earl reacted, shoving the child away. The boy bumped his head against the corner of the wall and started crying.

Ebony yelled at Earl, “Why you do that to him?”

Ebony went to pick up wailing toddler. Earl yelled at her, looking her in the eyes, “I told they little ass to stay in there! The little nigga almost grabbed my Glock. Take they little asses upstairs!”

Ebony bounced her toddler up and down and patted him on the back. She had her arm underneath his diaper, which leaked feces onto that arm.

Ebony tilted her head back and wrinkled her nose in disgust. “Fuck, let’s go upstairs and change you!”